Researchers measure a property of DNA for the first time 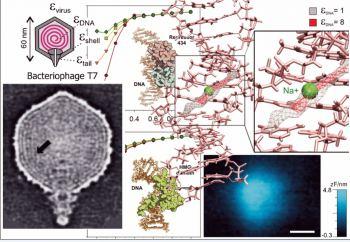 The electric polarizability of DNA is a fundamental property that directly influences its biological functions. Despite the importance of this property, however, its measurement has remained elusive so far.

In a study published in PNAS today, researchers at Barcelona’s Institute for Bioengineering of Catalonia (IBEC) led by Laura Fumagalli, senior researcher at IBEC and lecturer at the University of Barcelona, and their collaborators at the Institute for Research in Biomedicine (IRB) and at Barcelona Supercomputing Center (BSC), and at Centro Nacional de Biotecnologia (CNB-CSIC) and IMDEA Nanociencia in Madrid, describe how they have found a way to directly measure DNA electric polarizability – represented by its dielectric constant, which indicates how a material reacts to an applied electric field – for the first time ever.

The researchers have succeeded by using their own technique, recently developed at IBEC, based on electrostatic force microscopy (EFM). This type of atomic force microscopy allows researchers to explore not only the morphology of single biological complexes in their natural environment, but also to measure the electrostatic properties that make each object unique. Until now, though, this key property of DNA – its electric polarizability – has remained unknown, owing to the inherent difficulties in achieving such a measurement given the complex and soft structure of DNA.

The researchers have been able to quantify the DNA dielectric constant in a non-invasive way by measuring the DNA in its native condensed state inside a single bacteriophage – a virus that infects and replicates within a bacterium. The special nature of these viruses means that they carry genetic information condensed into a small shell, thus having their DNA in an almost crystalline structure which the researchers were able to dissect to determine the dielectric constants of the main components, the protein shell and tail.

They found that the dielectric constant of the DNA is around 8, much higher than was commonly assumed, and confirmed this value based on highly accurate theoretical calculations, using latest-generation atomistic computational tools and the computational resources of the Barcelona Supercomputing Center.

They found practically the same value, around 8, that strikingly matches their experimental observations.

“Our experiments and calculations reveal an inherent property of DNA that will allow the realistic prediction of its conformation and functions based on computational tools and help us better understand the essential roles DNA plays in our bodies,” says Modesto Orozco, leader of the Institute for Research in Biomedicine-Barcelona Supercomputing Center Joint Research program in Computational Biology and professor at the UB. “It also also opens up avenues for exploring fundamental polarization properties of other biomolecules.”