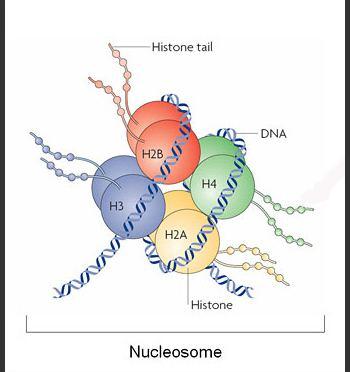 Researchers at the Institute for Research in Biomedicine (IRB Barcelona), Cambridge University and New York University, led by Modesto Orozco, Group Leader at IRB Barcelona, Director of Life Sciences at the Barcelona Supercomputing Center (BSC-CNS) and Professor at the University of Barcelona (UB), have determined the mechanics behind of one of the most common epigenetic modifications: histone-tail acetylation. Acetylation is a means by which a cell can control the expression of its genes.

The study published in the prestigious Journal of the American Chemical Society (JACS) reveals the effect of lysine acetylation in histone tails. "The most relevant acetylation reactions take place in a mysterious part of the nucleosome: the histone tails," explains Modesto Orozco. "Histone tails are loosely structured protein fragments. They are unfolded under normal conditions and when they move, they can touch other nucleosomes, thereby condensing chromatin," he adds. Nucleosomes are structures that make up the fundamental units of chromatin, which is the complex within which DNA is organized in eukaryotic cells.

Using simulation and nuclear magnetic resonance, the researchers found that the histone tails with lysine acetylation acquire a certain structure. "By forming this structure, they become shorter and lose their ability to touch other nucleosomes. As a result, the internucleosomal contact that condenses unmodified chromatin, doesn't happen and this produces DNA molecules that are more accessible to effector proteins and therefore more active," the researcher describes.

This is the first mechanical explanation at the atomic level of an epigenetic effect, one of the most important, that connects an epigenetic modification with a phenotypic effect," assures Orozco. "This leads us to believe that there is a similar explanation for other epigenetic modifications. There may be a very basic mechanism that accounts for the effect that they have on gene structure and expression," he concludes.