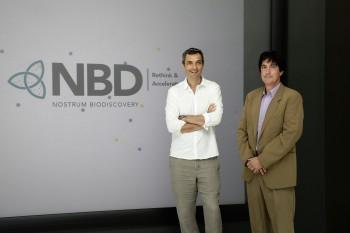 This morning in Barcelona, the Institute for Research in Biomedicine (IRB Barcelona) and the Barcelona Supercomputing Center - National Supercomputing Center (BSC-CNS) have presented Nostrum BioDiscovery, a new biotech company that applies computational simulation to help new drugs and biotech molecules to reach the market. The creation of this spin-off has also been made possible thanks to the Bosch i Gimpera Foundation of the University of Barcelona and the Catalan Institute for Research and Advanced Studies (ICREA). (see press dossier below)

The creation and launch of the company has been driven by the Botín Foundation, whose technology transfer programme has provided one of the research groups involved support and assessment over five years. Furthermore, the Botín Foundation has invested half a million euros of start-up capital in Nostrum BioDiscovery through its Mind the Gap Programme, which backs early-stage entrepreneurial projects.

Nostrum BioDiscovery will significantly speed up and increase the accuracy of the studies done prior to the commercialisation of pharmaceuticals and biotechnological products. The company specialises in cutting-edge informatics tools, computing power, and research of excellence. The services provided by Nostrum BioDiscovery could imply savings equivalent to about 40 million euros per new pharmaceutical product; this figure corresponds to between 15 and 20% less expense in the initial development phase, which involves an estimated investment of around 300 million euros.

“There are no easy drugs left to be discovered. The number of drugs being launched each year is falling and these are incredibly expensive. Computational simulation cannot perform miracles, but it can significantly reduce the drug development process by increasing therapeutic strength, which has a positive effect on the entire development process,” says Modesto Orozco, IRB Barcelona researcher, full professor of the University of Barcelona and president of Nostrum BioDiscovery.

The company has come about in the context of a transformation of the pharmaceutical industry business model, which is moving from drug discovery "in-house" to a model that involves partially subcontracting research and development. “The quality of our technologies and the expertise of the team make us a valid and reliable option for companies that want to speed up the initial stages of drug design and to gain efficiency,” comments Víctor Guallar, a scientist at the BSC-CNS, co-leader of the project, and also director of the Scientific Advisory Board of Nostrum BioDiscovery.

A vote of confidence from Mind the Gap

Through its Mind the Gap Programme, the Botín Foundation seeks to bridge the gap between science and the company to ensure that “highly innovative and viable research reaches the market and eventually benefits patients,” explained Íñigo Sáez de Miera, director general of the foundation, during the presentation of the Nostrum BioDiscovery.

The Botín Foundation is currently supporting the work of 28 scientists in Spain. It has achieved 48 patents and 27 agreements with companies, in addition to providing employment opportunities for 447 young researchers and technicians. Nostrum BioDiscovery is the fifth company to be backed by this initiative. The companies covered by Mind the Gap have generated 25 direct jobs, most of which are highly qualified, and achieved a turnover of more than 600,000 € in 2015.

The official presentation of the company was attended by the following: María Luisa Castaño, director general of Research, Development and Innovation Policies of the Ministry of the Economy and Competitiveness; the Secretary of State for Universities, Arcadi Navarro; and the Director  General of Research, Francesc Subirada, on the part of the Catalan Government; the directors of IRB Barcelona and the BSC-CNS, Joan J. Guinovart and Mateo Valero respectively; the entrepreneurial team of Nostrum BioDiscovery; and representatives from the institutional shareholders ICREA and the University of Barcelona.